My First Ever Holiday

I've just had my first ever holiday. I've never been on holiday before and I didn't even know that we were going.

Daddy and Puppinanapper told me as they were getting lots of bags and things in the car on Friday. They said that we were going to somewhere called Yorkshire to see WHS and A. I got very excited as I've seen them before and I really liked them.

We drove for ages and then everyone stopped for something called a PICNIC. This means that you stop and go for a walk and then have some dinner. We did this right by a really busy road and I was so glad to get out as I wanted to go to the toilet.

We then got back in the car and went for ages and ages. I think it was for about 2 days or something like that.

Puppinanapper woke me up when we went past a forest called Sherwood and he said that a man lived in there called Robin Hood and he takes things from people and gives them to other people. I don't know why but he said he was called a later day hero. Then later on we passed some big buildings where lots of smoke came out. I got bored at that bit and went back to sleep. 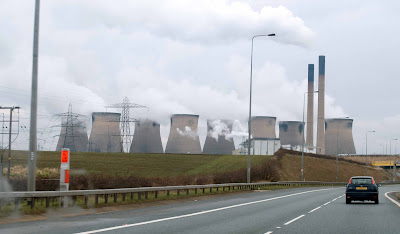 When we got there I was still tired and it was dark and so I thought I would go to sleep and see what would happen the next day. 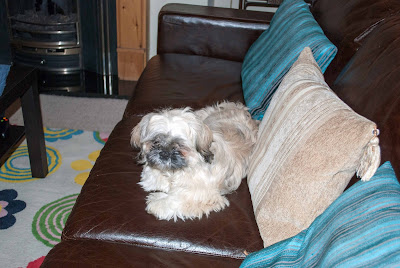 The next day I woke up and had my own bed right next to daddy. It was different from my bed at home but they had brought lots of my toys so I played with them for a little bit before I went for a little walk.

It was very different here than at home and lots of new smells but they had the same bins as us and I did see a cat. Cats are everywhere you go. 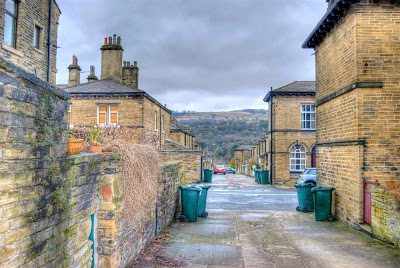 When we went around the corner and I saw a pot of some green food and it looked very lovely to eat but I wasn't allowed it but it let everyone know that I was hungry. 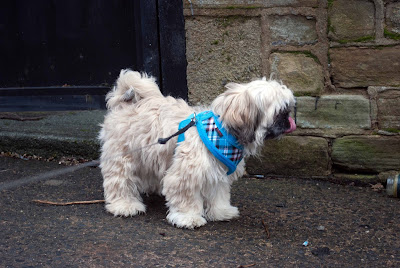 After we had some breakfast of scrambled eggs that WHS cooked for me especially we all went out and had a little look around. Puppianapper showed me a scary dolly thing in the window of a shop. Who would want such a thing? 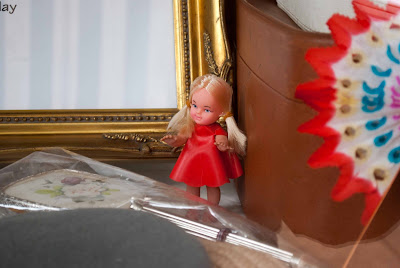 We then went and saw some lions. Lions are really really big and daddy says they are related to Lil'. I think he must have that wrong as they look nothing like each other but he said they definitely are. Wow I wonder if Lil' will grow that big and sit that still? 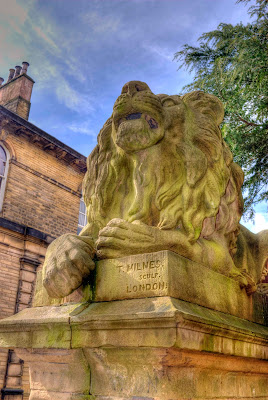 When we got to a bridge we went over it and there was a river under it. I thought that was wrong too because I'm River but this one had a boat on it and lots of birds were flying around and people were feeding them. I stood there for ages looking at them. It was very windy and it made my ears fly backwards but I just couldn't stop looking. I don't think I've ever seen a boat before. 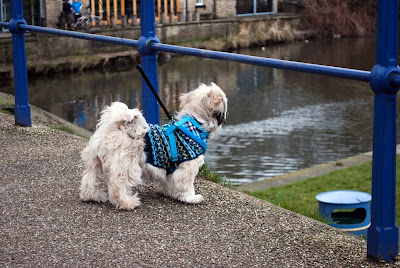 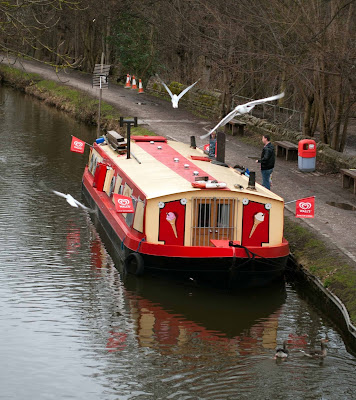 On the other side there was a great big park and I went running with daddy for ages. There was lots of other dogs running around. Oh it was brilliant. I wanted to play with them but wasn't allowed to but I didn't mind too much as this was fun. 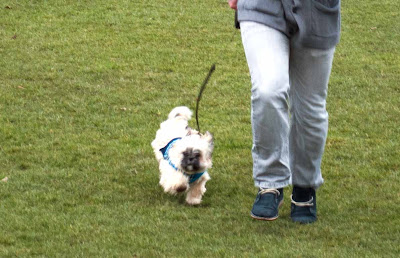 I was very tired after all the running around and so everyone went to a pub right by another river. They are everywhere here pubs and rivers.

I did have a little accident and managed to slip out of my reigns. It was very frightening and I just stood really still until Puppinanapper picked me up and said that as I was a good girl I could sit up at the table and join in with everyone. Then some friends of A and WHS's came with a little baby and we all sat together.

I've never been this close before to a little baby and she just looked at me. I wouldn't hurt her and I don't think she was scared but Puppinanapper took my paw and rubbed her hand with my soft hair so that she didn't get upset. 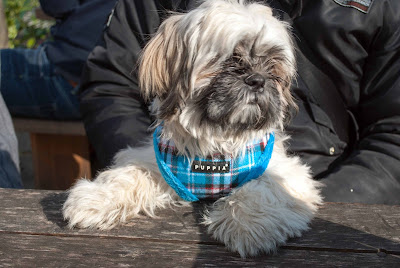 Then everyone went into a building to look at some paintings or something but I wasn't allowed in and so I went for a little walk with WHS. For some reason when everyone came out we had to do something daddy called a runner .To me it was just running but maybe that's what they call it Up North as Puppinanapper calls it where we had come to. 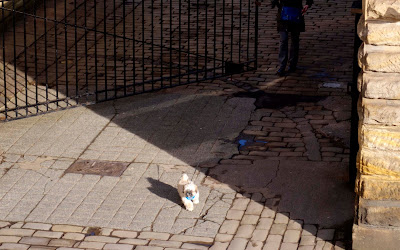 They really like going to pubs as then we went to another one called Fanny's Bar. They all found this very funny. They let dogs in there and I played with a couple before getting very tired and I went back to sleep.

I was very tired because they had forgotten my day time treats and I was hungry so when we came home I got a great big dinner and lots of treats to make up for it. Goodness me those people can talk and talk and talk and drink and talk and they did about things like toilet rolls and cotton wool. Don't ask my why they found that so funny. Sometimes humans find the strangest things funny.

I had such a busy day I just fell asleep again only to wake up in bed upstairs with everyone asleep. I don't know how I got up there but I think they must have carried me up but I knew it was time to get up so I crawled under the bed and jumped up at Puppinanpper until he took me down for some breakfast and a little walk. 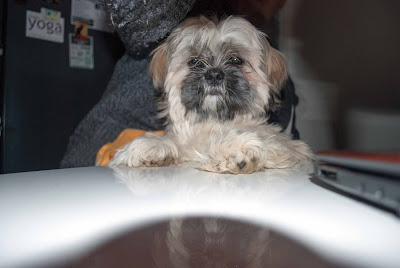 It was then time to go home and so all the bags went back into the car and I went on daddies lap. I'd done this journey once before and so I didn't need to see the same things again but I did wake up when I heard Puppianapper say it was snowing.

SNOW. I LOVE IT. But this snow Puppiananpper said was different from the snow we have when we are all indoors. I don't know why it looked the same but he said that it was something called frightening snow so me and daddy closed our eyes until we got to go on another picnic. You must always have picnics when you go on holiday.

I didn't like this one as much as before as after a little walk I was put in the back of the car as daddy and Puppianapper had a picnic and I had a whinge. 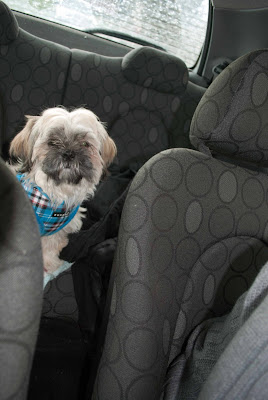 I wasn't having that being put in the back. I like it in the front and so jumped on daddies head and everyone laughed. Then they pointed out some lady that bent over to pick up her scarf and said she had a mishap. No idea what a mishap is maybe it's what they call it when someone drops something and it makes you laugh so much that tears come down your face which they did to daddy. 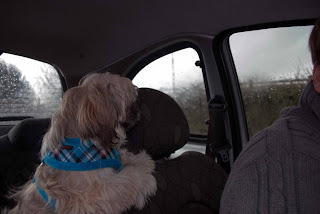 It wasn't long then until we got back home. Lil' was waiting for me on the table. I told her all about my holiday. It would have been good if she came with us. I missed her and am going to give me a kiss later. 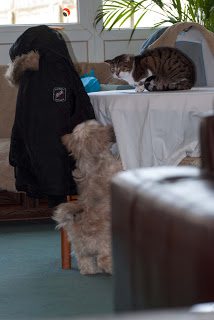