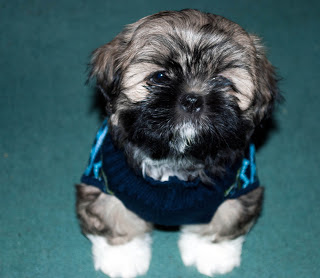 I was born into a house that was near the sea. I don't remember much from when I was very little but I'm learning a lot now.

I've got a brother and a sister and I lived with my mummy and aunt Tora. There was also a Parrot but I don't speak bird so I never had much idea what he was going on about. Our human mummy was a lovely lady and gave us all lots of love and attention. This all helped, the men who I now live with said, to help with my outgoing demure whatever that may be.

When I was 8 weeks old these two men my new daddy and Puppynap came and visited the human mummy and I came back with them to their house. That's when I became River, before that I was known as Conchetta Margareita.

There's a cat called Lil' who lives with me, although Daddy says she's now gone to another place and a tortoise called Nadia who is BRILLIANT fun, and loves my pushing her around the slippy floor with my head. There's also a couple of goldfish call Alo and Ha, that live high up in a Waterworld. I'm not allowed anywhere near there yet!

Oh I''m so excited I've got a garden and toys and everything and just now I've got a new best friend, David-Shiro, my little cat brother. Wow!

This is my new life and these are my songs.